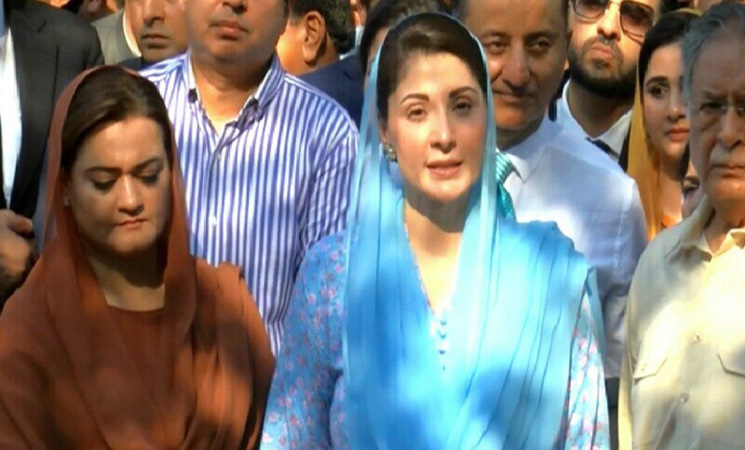 The PML-N Vice President Maryam Nawaz Thursday said her and Captain (retd) Safdar’s acquittal in the Avenfield case had not only exposed Imran Khan’s fake accountability narrative, but also vindicated Nawaz Sharif from baseless and unfounded allegations of corruption. Talking to media persons outside the IHC, Maryam thanked her counsel advocates Amjad Pervez and Salman Akram Raja for vigorously pursuing the case. “The Allah Almighty has exonerated PML-N supremo Muhammad Nawaz Sharif family from baseless and fake allegations levelled against them. Soon Nawaz Sharif will arrive in country,” she added. Maryam Nawaz also lauded the IHC’s verdict. Lashing out at Imran Khan, she said the PTI chairman was a liar, conspirator and traitor. “He will have to answer for his misleading propaganda and allegations. History will seek answer from him for sullying a respectable family,” she added. Maryam said Imran Khan was imposed on the country under a well hatched conspiracy to oust Nawaz Sharif as it was difficult for the former to become prime minister of the country in the presence of latter.

She said her father had decided to face Panama cases despite the fact that his friends and well-wishers foretold him about his likely punishment. The PML-N vice president demanded constitution of a high powered probe committee to probe into conspiracies hatch by Imran Khan, and also called for his arrest at the earliest.

Referring to Imran and his principal secretary’s audio leak, she said Imran was heard in the leaked audio as saying that “let’s play with the cipher.” The bureaucrat then told Imran how to use the conspiracy card to fool the people, she added. “Imran must be punished for playing with the country’s national interest and security. Perhaps, he was treating the country as Lahore’s Gaddafi Stadium,” she remarked sarcastically.