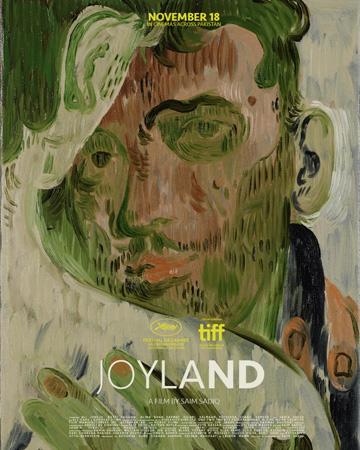 Award-winning film at the 75th Cannes Film Festival, ‘Joyland’ is all set to hit theatres in Pakistan on November 18.

Promotions of the film will begin with an imaginative poster that highlights the themes of the silver screen family drama. Now, viewers can behold an illustrious visual that will further raise anticipation across the country. With the official poster release, the Pakistani audience is finally getting a glimpse into the visuals of the coveted film. The film will be distributed nationally by IMGC Distribution Club and will release in cinemas nationwide including in major cities such as Lahore, Karachi, and Islamabad. Written & Directed by Saim Sadiq and Produced by Apoorva Guru Charan, Sarmad Sultan Khoosat, and Lauren Mann, the film’s ensemble cast includes debutants Ali Junejo, Alina Khan, and Rasti Farooq alongside some of Pakistan’s beloved and respected actors like Sarwat Gilani, Sania Saeed, Sohail Sameer, and Salmaan Peerzada.

The official poster for the film is created from a painting by the superbly talented artist Salman Toor who shared some details about the portrait:

“‘Over His Shoulder’ is a portrait of a man looking out from inside an embrace. His slightly defiant gaze shows him as someone who is loved and who gives love back, generously and without fear. The curved stylization of the painting communicates the warmth and humanity of this caress. In Joyland, Saim confidently explores the empowerment and trauma of traditional and non-traditional relationships in a society weaponized by patriarchal ideas of decency and shame. I’m thrilled to lend this image for Sadiq’s incredible and vital new film.”

In May 2022, ‘JOYLAND’ made the entire nation proud when it received an 8-minute long standing ovation at its world premiere at the 75th Cannes Film Festival where the motion picture won the ‘Un Certain Regard Jury Prize’. Following that, it received yet another standing ovation this September 2022 at the Toronto International Film Festival (TIFF) after its North American premiere. The film then won the award for ‘Best Film of the Subcontinent’ at the Indian Film Festival of Melbourne in August.

Set in Lahore, the storyline primarily revolves around ‘Haider’, the youngest son of a middle-class family who secretly joins the theatre as a background dancer and develops a friendship with ‘Biba’, a trans dancer struggling to make a mark in theatres. The family drama emphasizes the themes of desire, secrets, and empathy.

The highly anticipated film has also officially been passed by all the censor boards of Pakistan. The Federal, Punjab, and Sindh censor boards graciously cleared “Joyland” so that the country would welcome the local release of a film that has brought so much honour and acclaim to Pakistan on a global scale.

Sheikh Abid Rasheed, the Executive Director of Distribution Club, expressed his excitement at bringing this prestigious film to the Pakistani screens and added that the preparations for the release of the film had entered the final stages. Now that the film’s poster is released, the teaser and trailer are said to be released soon as well. The film begins its promotions in October 2022 before its official release on 18th November when it will finally be in theatres for the Pakistani audience to experience.