Bushra Ansari shamed for showing ‘too much’ 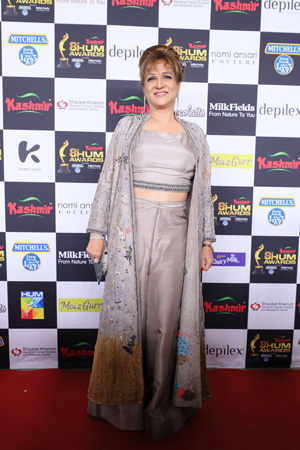 Veteran actor Bushra Ansari became a target of the internet trolls after appearing in one of the events of 8th Hum Awards showing her midriff.

Pakistani female artists often face criticism for their looks and outfits more than the male stars.

This time, the internet trolls have targeted Bushra Ansari and age-shamed her after she was spotted at Hum Awards wearing a front open dress showing off her midriff.

Most of the comments under the post stated that they respect Ansari, but fashion should be age appropriate.

One of them said that Bushra’s legs are in the grave, but she was still wearing such an outfit.

A user raised the question of the actor’s fashion sense and another said that she is resembling a ‘low-key stage actress’. “Vulgarity in this age,” a user who goes by the name Mahmood Farooq wrote. Going through these comments, we couldn’t help but feel dissatisfied that such a brilliant artist is being questioned for her choice of dress, especially in this day and age!