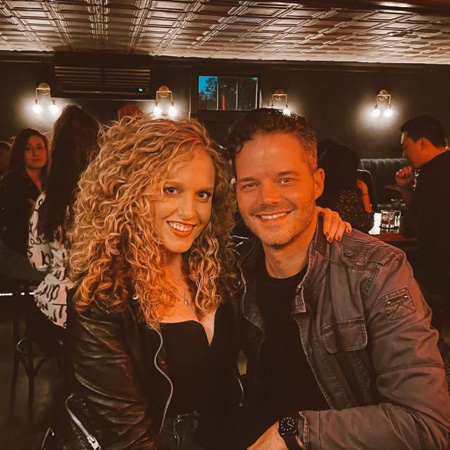 Count to ten, take it in: Taylor Swift’s BFF is married! Abigail Anderson tied the knot with Charles Berard in a romantic ceremony over the weekend. As seen in Instagram Stories s re-shared by Abigail, the bride was clad in an off-shoulder white gown with her signature red curls in an updo as she exchanged vows with her groom.

Wedding guests included TikToker Danae Hays and musician itsjustrand, who performed during the newlyweds’ first dance. It’s unclear if Taylor was in attendance, though the pop star did serve as a bridesmaids at Abigail’s 2017 wedding to photographer Matt Lucier.

The nuptials came 10 months after Abigail announced her engagement. In a November 2021 Instagram post, Abigail called Charles “my man, my life” as she shared photos of her love popping the question atop of a cliff during a sunset proposal. She added at the time, “This happiness.”

As Swifties know all too well, Abigail is one of Taylor’s oldest friends and closest confidants. In fact, she was even name-dropped in the singer’s 2008 smash hit “Fifteen” as the “redhead” Taylor sat next to during her first day of class. “And soon enough you’re best friends,” Taylor sang on the track. “Laughing at the other girls, who they think they’re so cool.”

Since that fateful meeting, Abigail has continued to be a mainstay in Taylor’s squad. When Taylor turned 30 in 2019, Abigail was on-hand to fête the pop star alongside Gigi Hadid and Martha Hunt at a star-studded bash in New York City. “Thir-tay never looked so good,” she captioned a shot from the party on Dec. 15, adding in another post, “We jingled ALL the way.” Abigail also had nothing but loving words when Taylor released her seventh studio album Lover that same year. Sharing a photo of the record’s cover art, Abigail wrote on Instagram on Aug. 23, “15 years of knowing you and watching you grow, both as a human and an artist, I can honestly say I’ve never been more proud to call you my friend. I am completely inspired by everything that is you, @taylorswift. Congrats, buddy.”