Khloe Kardashian and Michele Morrone spend time together in Italy 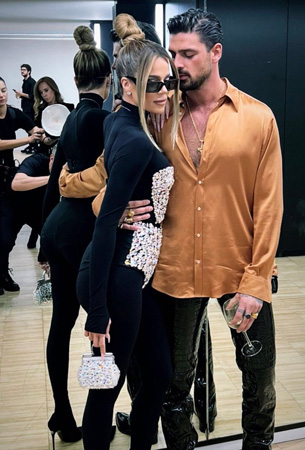 Khloe Kardashian is living her best single life as a mom of two, following the birth of her son with ex Tristan Thompson. The Kardashians star sparked romance rumours with Italian actor Michele Morrone after the two were spotted together Sept. 24 during and after Dolce & Gabbana’s spring/summer 2023 Milan Fashion Week show, where the designers and her sister Kim Kardashian debuted their new collection together.

As seen in a photo the actor posted on his Instagram Story, he and Khloe later got cosy backstage. He wrapped his arm around her and appeared to whisper in her ear. The pic went viral, as did another video shared by fans, which shows the two dancing closely at an after-party.

E! News has reached out to the star’s reps comment and has not heard back. As of Sept. 25, neither Khloe, 38, nor Michele, 31, follows one another on Instagram.

If the pair are not platonic, the actor would be the second man romantically linked to Khloe since she and Tristan broke up last year. This past June, E! News confirmed the reality star had begun dating a private equity investor, whose name was never made public. The pair’s romance later “fizzled out,” a source said in August, about a week after Khloe and Tristan welcomed their son, who joined their daughter True Thompson, 4.

The Good American founder introduced the boy, whose name has not been released, on the season two premiere of The Kardashians on Sept. 22. On the Hulu series, Khloe got emotional speaking about her bittersweet journey to baby No. 2, born July 28 and conceived with Tristan via surrogate a month before she found out the NBA star had fathered another child, also a boy, with Maralee Nichols.

On Sept. 24, Khloe thanked her fans for their support after shying away from social media amid increased criticism over her choice to expand her family with Tristan despite his past infidelities.

As for the athlete, who is now a father of four, he has also moved on. He has been photographed with other women since his split from Khloe, most recently on Sept. 21, the eve of The Kardashians premiere, when he was spotted leaving a West Hollywood party with a woman multiple outlets identified as OnlyFans model Juanita JCV and getting into an SUV with her.

And on Sept. 25, hours after photos of Khloe and Michele went viral, he shared a thirst trap on his Instagram Story. “Sunday morning. Locked in,” he wrote, alongside a mirror selfie of himself shirtless in a gym. “Be bless.”