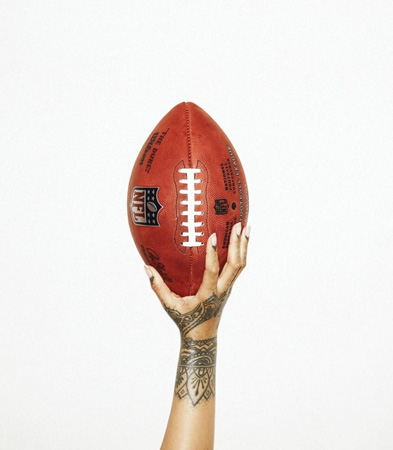 Rihanna is headed to the Super Bowl. Without saying a word, the 34-year-old has confirmed that she will perform at the 2023 Super Bowl Halftime Show. On Sept. 25, Rihanna posted on her Instagram a photo of her hand holding a football.

“Rihanna is a generational talent, a woman of humble beginnings who has surpassed expectations at every turn,” group founder Jay-Z said in a statement provided by Roc Nation, the NFL and new Super Bowl sponsor Apple Music. “A person born on the small island of Barbados who became one of the most prominent artists ever. Self-made in business and entertainment.”

NFL sources also confirmed Rihanna’s participation to TMZ, which had previously quoted sources with knowledge of the situation as saying that there have been multiple discussions between the NFL and Roc Nation to have the singer headline the show. The 2023 Super Bowl is scheduled to be played at the State Farm Stadium in Glendale, Ariz. on Feb. 12.

Rihanna’s post comes three years after she told Vogue that she “absolutely” turned down a Super Bowl halftime show gig offer in solidarity with Colin Kaepernick. “I couldn’t dare do that,” the R&B singer said. “For what? Who gains from that? Not my people. I just couldn’t be a sellout. I couldn’t be an enabler. There’s things within that organization that I do not agree with at all, and I was not about to go and be of service to them in any way.”

Her change of heart also comes following a major life change. This summer, the Rihanna became a mom, welcoming her and boyfriend A$AP Rocky’s first child, a baby boy. The star has not performed music onstage since the 2018 Grammy Awards, and has not released a new album since 2016 or new music in general in more than two years. The Fenty founder has in recent years concentrated on her beauty and fashion design career, while also teasing a ninth studio album. Also since 2015, Rihanna has been working on a documentary about her life with director Peter Berg.

Days before Rihanna’s Instagram post, there was speculation that Taylor Swift could headline the Super Bowl Halftime Show, as the NFL recently ended its long-standing partnership with Pepsi, and the singer had past endorsement deals with competitor Coca-Cola. People later reported that the singer would not perform the gig.