Debt down by Rs 1.35tr since my landing: Dar 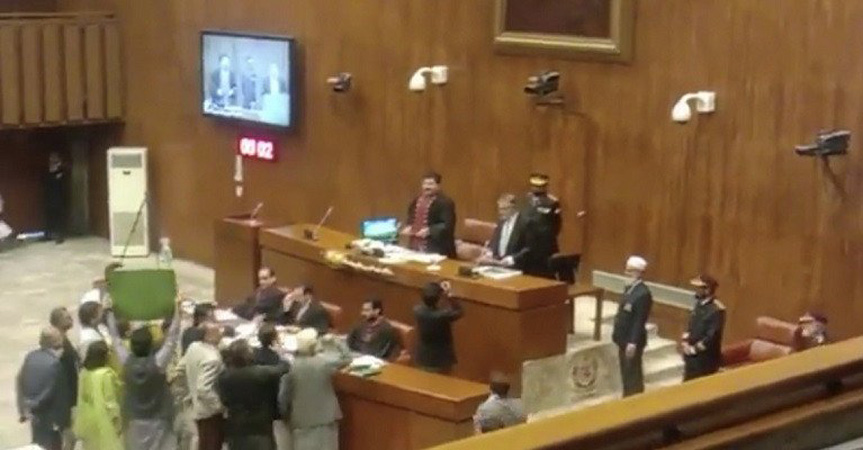 PML-N leader Ishaq Dar on Tuesday took oath as a senator during a swearing-in ceremony at the Senate after living five years in self-imposed exile in the United Kingdom. Senate Chairman Sadiq Sanjarani administered the oath amid the ruckus created by the Opposition. PTI members tore the copies of the agenda of the meeting to register their protest and also surrounded the dais. The Senate chairman directed all members to maintain the decorum of the Upper House as Dar continued to receive felicitations from members of the coalition parties. The politician, who touched down in Pakistan with Prime Minister Shehbaz Sharif Monday night, will swear in as the federal finance minister on Wednesday at 10am. President Arif Alvi will administer the oath to Dar at Aiwan-e-Sadar. Speaking to media after oath, Dar said that the rupee’s value has been kept low artificially, adding that such practices cannot hold the local currency hostage. He said that the US dollar depreciated by around Rs10 against the rupee since he landed in the country, stating that one of the problems faced by the country is the artificial depreciation of the rupee.

“Inflation is also high,” he said listing the issues that the coalition government has to fix. Referring to the winning streak of the rupee in the market, the PML-N leader said that the country’s debt reduced by Rs 1,350 billion in less than 24 hours. He also stressed the need for amendments to the previous finance bill. ‘I will try my best to pull Pakistan out of maelstrom’.