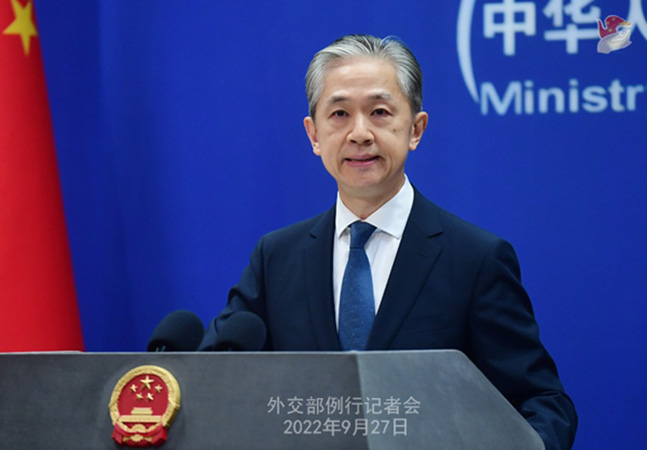 Hours after US Secretary of State Antony Blinken called on Pakistan to seek debt relief from China so that it can more quickly recover from the floods devastations, Chinese Foreign Ministry Spokesperson Wang Wenbin said that his country was doing all it can to help its ‘genuine friend and brother in times of need’. At least 1,600 people have lost their lives while the estimated cost of flood damages and losses stands at a staggering $28 billion with nearly a third of the country still submerged by the deluge. Pakistan has made similar appeals for “debt swaps for climate action” to other countries.

When asked if China was planning any debt relief for Pakistan, Wenbin during his daily briefing said since the floods hit Pakistan, China has rushed to its aid as its genuine friend and brother in times of need. “The Chinese government has provided 400 million RMB (approximately $56 million) worth of humanitarian assistance and China’s civil society has also lent a helping hand,” he said. The Chinese official said that they will continue to do their utmost to help the Pakistani people overcome the floods and rebuild their homes at an early date, adding that the two countries have had fruitful economic and financial cooperation. “The Pakistani people know it best.”

Coming down hard on the United States over its criticism, Wenbin said instead of passing “unwarranted criticism against China-Pakistan cooperation, the US side might as well do something real and beneficial for the people of Pakistan”. Earlier, Secretary of State Antony Blinken reaffirmed US commitment to the people of Pakistan, announcing the additional $10 million as food security assistance to the already announced $56.5 million in flood relief and humanitarian assistance. US Spokesperson Ned Price said this is a statement issued following the meeting between Secretary of State Antony J. Blinken and Foreign Minister Bilawal Bhutto Zardari in Washington DC. The spokesperson said “Secretary expressed sorrow over the devastation and loss of life throughout Pakistan caused by catastrophic flooding”. Pakistan’s Foreign Office said FM Bilawal apprised Secretary Blinken about the devastation caused by the cataclysmic floods with more than 33 million people displaced and a huge loss of lives and livelihoods. He highlighted the relief efforts of the Government and people of Pakistan and thanked the U.S. government for its assistance. The foreign minister said no country could deal with a crisis of this proportion on its own. He emphasized that Pakistan being one of the lowest emitters was ironically one of the most severely impacted by climate change.

The foreign minister said that Pakistan was seeking climate Justice and looked towards its partners to assist us in recovering from this climate induced calamity. FM Bilawal said that Pakistan was committed to building back better, greener and climate resilient infrastructure in areas such as irrigation, communication, energy, agri-technology, and health. Immediate action is required to help developing countries effectively face the climate crisis. The Foreign Minister underscored the historic and growing importance of Pakistan-US relationship in promoting peace, security, and economic prosperity in the region. He reaffirmed Pakistan’s commitment to deepening and broadening its ties with the U.S. particularly in the areas of trade and investment and underlined that both countries were celebrating 75th anniversary of the establishment of diplomatic relations in a befitting manner and were charting a promising and mutually-beneficial roadmap for their future generations.

Secretary Blinken expressed sincere condolences and solidarity with Pakistan over the loss of precious lives and monumental economic losses. He reaffirmed the U.S. commitment to continue cooperating with Pakistan in meeting the challenges of rehabilitation and reconstruction. Secretary Blinken also maintained that, given Pakistan’s enormous potential, US private sector would like to invest in Pakistan including in energy sector. The foreign minister expressed the need to assist Afghanistan in averting the humanitarian crisis and underlined that Pakistan would continue to work with the international community to achieve peace, development, and stability in Afghanistan.