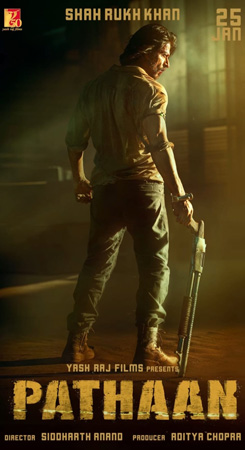 As the buzz around Shah Rukh Khan’s Pathaan gets louder, the star decided to crank it up a notch and shared a shirtless photo of himself on Sunday. Keeping to his usual witty and sharp words, he penned a post ‘for his shirt’, and said that he was also waiting for Pathaan.

Fans commented with adoring replies, with many hailing the film as a sure-shot blockbuster of 2023. One fan wrote, “2023 belongs to you and only you! It makes me so emotional every time I think of how hard you are working to bless us with 3 movies next year. All my love and respect to you my hero!”

Just a while ago, Deepika Padukone, who also features in the film had shared a photo of the script of Pathaan kept on a table under the mic. The makers have been unveiling teasers and motion posters that are just adding to the feverish hype surrounding the film.