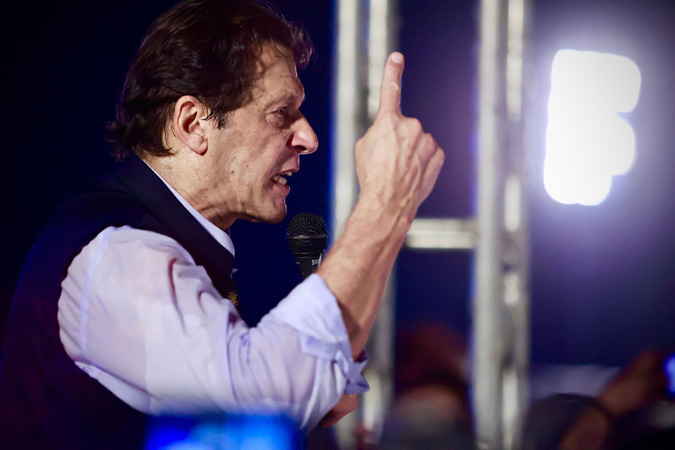 Former prime minister and PTI Chairman Imran Khan has expressed ‘conditional’ willingness to return to the National Assembly, saying that his party may rejoin the lower house of parliament if diplomatic cypher on ‘regime change conspiracy’ is investigated.

Speaking to journalists in Islamabad on Saturday, the PTI chief said that the establishment in Pakistan is a reality and it “has all the powers”. “The PTI had good relations with the establishment, I don’t know how and when they worsened,” he said.

“The government needs to have better relations with the establishment than the opposition,” he said, adding: “How can we have links with the establishment while being in the opposition?” The former prime minister said that he wanted friendly relations with all countries including the United States and India in national interest. However, Imran said he cannot accept any policy which advocates India’s supremacy in the region and recognition of state of Israel.

Commenting on PM Shehbaz’s UNGA address, Imran said the premier’s speech was announcement of the country’s bankruptcy. PM Shehbaz and Finance Minister Miftah Ismail have sunk the country’s economy, he claimed. “The current government has brought the economy to such a point that it needs surgery instead of medicine while Miftah is treating cancer patient with aspirin,” said the PTI chief.

“Ishaq Dar is ready to return home as soon as the NAB case against him is over. Later, Nawaz Sharif will also return to the country,” the former premier said, adding that he won’t repeat the past mistakes that he made during his first stint at power if he returned to the power corridors again. “If we get to rule the country again, we will not repeat the mistakes made in the past. The PTI government had come into power for the first time and hence, mistakes were made,” he admitted. The former premier also said that his party has a “comprehensive plan” to stabilise the economy. 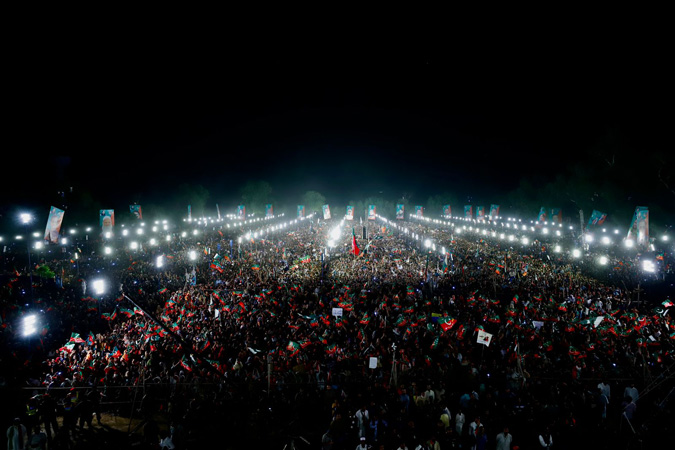 Separately, addressing a rally in Rahim Yar Khan, Imran Khan said that the nation looks ready to get real freedom as he tells people to remain prepared for his call. The ex-PM said that he would give the ‘final call’ when he knows he will ‘bowl out’ three-wickets on one ball. I will give the call for decisive march against the government when my opponents would feel I have retreated, he added. It will be the last call after which there will be no protest or sit-in, he said, and added that he is keeping the eyes on preparations of the PTI’s organizations for the decisive march. He urged the nation to come out for real freedom as it could not be given in a plate while he emphasized that it has to be snatched.

He asked what the country’s leaders were doing in the US when the country was reeling from the aftermath of devastating floods. The ex-premier said that the officials of the Pakistan government were staying in the expensive hotels in the US while ‘begging’ international community for aid. He played several clips of the Prime Minister Shehbaz Sharif from his interviews and speech in the United Nations General Assembly (UNGA) and lampooned him for ‘begging’ before the world. Imran Khan associated the premier’s appeal to the international community as to what happens with a country when ‘corrupt’ people – who were on the verge of getting indicted in corruption cases – were imposed on the country through a conspiracy. He recalled that 60% of the federal cabinet was on bail and how they twitched the National Accountability Bureau’s (NAB) laws to get rid of the corruption cases against them.

PTI chairman claimed that the global community knows that the incumbent leadership of Pakistan is corrupt which is why it is refraining from giving aid to the flood-hit country. He says the government is running away from elections because it can foresee its defeat against him. Four people have hatched a conspiracy behind closed doors to kill me, he reiterated. Imran Khan said that the leaders of PML-N held pressers to invoke sentiments against him on religious grounds so that if he gets killed, they could blame it on religious fanatics. PTI chairman said that every corrupt person was getting relief under this government as he told people about the return of former finance minister Ishaq Dar.

He recalled how Dar fled Pakistan after admitting committing money laundering for Sharif family. Imran Khan said that the ex-finance minister destroyed Pakistan’s economy during his tenure and warned that he would mobilize people against the plunder and loot which is on cards. Calling out those who brought the ‘cabal of crooks’ in power, Imran Khan said the nation would never forgive them as he recalled the growth of economy and economic milestones achieved by the PTI government during its 3.5 years. He said that there is no ‘real democracy’ in the country as the critics are picked up and tortured. He called for the judiciary to stand for protection of the basic rights of the people.

The ex-PM cited examples of nations that went on to progress after application of true democratic norms. The time has come to take real freedom from the thieves who come to Pakistan to only loot it and then return abroad; Pakistanis you have to stand against it, Imran Khan said. Calling out Interior Minister Rana Sanaullah for threatening to use tear-gas shells and pellet guns on PTI’s protesters anticipated to reach Islamabad soon, PTI chairman said that staging peaceful protest is his basic democratic right. He recalled how the PTI government allowed then-opposition to come to Islamabad and stage anti-government protests and sit-ins. We did not create obstacles but rather facilitated them. The ex-PM said that they did not contemplate that the government would resort to power against women and children when they took out Haqiqi Azadi March in May. However, he said that they would come all prepared this time.

Meanwhile, PTI Chairman Imran Khan said that no matter how much his opponents tried, a “minus-one” formula to knock him out of the political contest would not work. Speaking in an interview on a private TV channel, Imran said his opponents were looking for a “technical knockout” to somehow sideline him from the political process since “they know they can’t face me in a match.” Imran once again alleged that Chief Election Commissioner Sikandar Sultan Raja was part of this plan and was conducting every PTI-related case, such as the Toshakhana and foreign funding references, in a biased manner. The PTI chief said that the PPP and the PML-N, and their leaders, should also be investigated under the two references. “I think this minus-one [approach], no matter how much they try can never be successful. Because all of their efforts, they have looked at everything, and if after 3.5 years they only found the Toshakhana [reference] then it means they actually haven’t found anything.” He also issued a challenge for any single illegality to be shown in the Toshakhana reference.

The former prime minister was also asked about the PTI government’s relations with the establishment and reports of the latter stepping back in its support during the former’s last year to which he said he had the “best relations”. “It was because of that equilibrium that the country got out of its problems,” he added, further saying that there were no problems. “[However], if the establishment thinks [that] in this current system of ours that has formed, if it can withdraw support and say: ‘we are neutral’ and any government can continue then no one should have this misconception.” Imran said that such a moment would arrive but for a coalition government in the country where the establishment was so powerful, “the day the establishment signals that it is stepping back from a government then it can’t continue.”