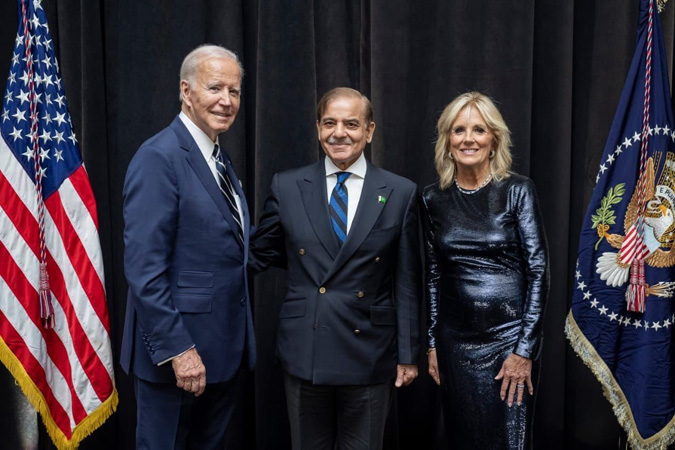 US President Joe Biden, in a meeting with Prime Minister Shehbaz Sharif, has expressed determination to continue extending support to the people affected by floods in Pakistan, according to an official statement. The two leaders met at a reception for world leaders participating in the 77th United Nations General Assembly (UNGA) in New York. During the meeting, Biden expressed grief and sorrow over the loss of several lives due to devastating floods in Pakistan and also sympathized with the affected families. Pakistani prime minister expressed his gratitude to the US president for his condolences and sympathy. The premier also thanked Biden for supporting Pakistan and for urging the international community to help the flood victims. Shehbaz also thanked the US government and United States Agency for International Development (USAID) chief for her visit to Pakistan and offered his gratitude for sending aid for the flood-affected people.

PM Shehbaz along with other world leaders was invited to the reception by the US president. This is the first interaction between Biden and the Pakistani prime minister. Since being elected as the US president, Biden has not spoken to either former prime minister Imran Khan or his successor Shehbaz Sharif. The meeting despite being informal is significant given the fact that the Biden administration during Imran’s government largely ignored Pakistan. However, since the change of government, there has been a flurry of engagements between the two countries.

Earlier, in his address to the UN General Assembly, Biden made a fervent pitch for extending help to Pakistan where floods had caused huge devastation. In his address, Biden announced over $2.9 billion in new assistance to address global food insecurity, building on the $6.9 billion in US government assistance to support global food security already committed this year. Earlier this month, a senior adviser of the US secretary of state visited Pakistan and the Biden administration also approved the $450 million sale of F-16 equipment to Pakistan.