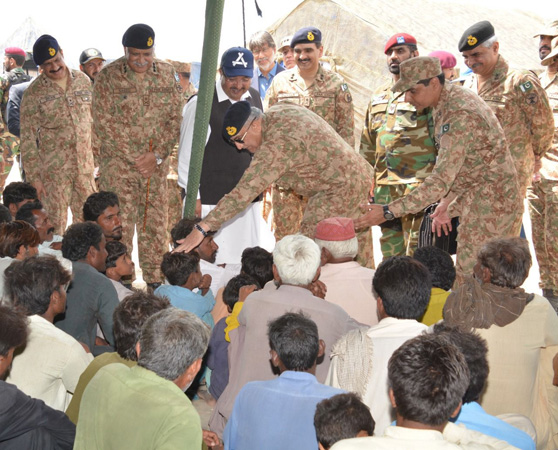 Chief of the Army Staff General Qamar Javed Bajwa on Friday visited flood camps in Badin district of Sindh and other adjoining areas. Later, he met with traders of Sindh and urged them to play their due role in providing aid to victims.

According to images and videos released by the military’s media wing, Inter-Services Public Relations (ISPR) , Gen Bajwa conducted an aerial inspection of the flood-hit areas in and around Badin on Friday.

He also visited relief and medical camps where flood survivors were being provided with shelter, aid and relief goods.

The army chief also met with troops engaged in relief activities in Malkani Sharif and spent some time with them. Later, he met with the traders community in Karachi. The army chief said that the business community has always stepped up during various natural calamities in the country. This time too, he said, without the help and support from the traders community, it will not be possible to help the affected people. The business community acknowledged the role of the military in providing a safe environment for economic prosperity, they also assured maximum support for the flood victims.