* After the film's first brain-melting all-media screening at the Lincoln Square IMAX in New York, suddenly, all anybody wanted to talk about was 'Avatar' 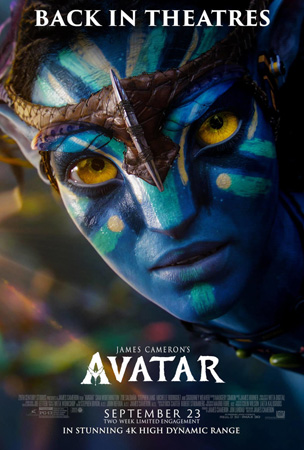 For all his technical expertise and storytelling prowess, James Cameron might well be cinema’s master of the vibe shift. I still remember the week in 1997 when Titanic went from being thought of as an incoming disaster, one that was going to take two major studios down with it, to being thought of as a blockbuster that would remind everyone why we kept Hollywood around. The tide similarly turned on Avatar back in 2009.

For months, so many of us expected a much-delayed, over-indulgent monstrosity from a filmmaker who was clearly living in his own head and had nobody to say no to him. I recall Dana Goodyear’s epic New Yorker profile that depicted Cameron geeking out over seemingly imperceptible VFX details.

And then, we saw the damn thing. After the film’s first brain-melting all-media screening at the Lincoln Square IMAX in New York, suddenly, all anybody wanted to talk about was Avatar. The rest is history – as it was with Titanic, as it was with Terminator 2: Judgment Day. The word went forth and the word remains: Never underestimate James Cameron.

One can sense a similar sea change coming for Cameron’s much-delayed sequel, Avatar: The Way of Water, which after years of false starts and date changes is now set to arrive this December. For years, Avatar – both the extant original and this ever-so-slowly approaching follow-up – has been the butt of jokes and narrow-minded hot takes, the most prevalent one being that the film has left no pop-cultural footprint. That silly take, of course, contains its own rebuttal. If Avatar is so forgotten, how come some new person needs to remind us every week that it’s so forgotten?

Perhaps more importantly, to play the pop-culture-footprint game is to play right into the hands of the corporate IP overlords who have stuffed us full of second- and third-rate Star Wars and Marvel and DC offerings for the past decade or so. No, there haven’t been dozens of Avatar sequels and spinoffs and reboots and TV shows and streaming series; Hulu is not currently working on an origin story for the Home Tree and there is, as far as I can tell, no Disney+ animated series following the adventures of a family of thanators. This is a good thing. Let Avatar be Avatar, and let its sequel succeed or fail on its merits, and not on whether it fits into an exhausting and inane extended universe, or whether it sells enough lunchboxes.

But like I said, a shift is coming, and recent months have seen a massive surge of interest in Avatar: The Way of Water, perhaps because people have suddenly begun to care about movies and the theatrical experience again. Now, to prime us for the sequel, Avatar itself is back in theatres, which remains the ideal setting in which to see it – especially in 3-D, as it’s one of the few productions to use the technology properly. In fact, after the unprecedented success of Avatar, Hollywood spent so much time trying to retrofit big releases into 3-D that they all but killed off the technology. Maybe that’s another measure of Avatar’s pop-cultural impact: All the movie graveyards filled with wannabe blockbusters that couldn’t live up to the promise of Avatar. Others’ failure can be a measure of your success, too.

One of the side benefits of there not being dozens of other Avatar properties out there is that, watching Avatar again after all these years, one realizes just how special it is. All that fussing over maxilla bones and gill-like membranes, it turns out, pays off. Cameron and his artists have so lovingly imagined the moon of Pandora that every shot of the film contains new wonders. One can lose oneself in this world, and as I recall, back in the day, many people did. No joke: There were reports of people experiencing depression after leaving the film because Pandora was too real, too enticing, too beautiful. A term for it began to stick: Post-Avatar Depression Syndrome.

Cameron’s special power has always been his ability to mix tech-heavy macho bluster with a kind of earnestness that would be corny in lesser hands; I once called him a flower child who speaks fluent badass. He peoples his movies with believable tough guys who talk like they know what they’re doing and handle their guns the way they’re supposed to. There’s no pretension or condescension with such characters, even when they’re cartoonish villains, as they are in Avatar. Or even when they’re comic relief: Think back to Bill Paxton’s blustery Hudson in Aliens, whose mixture of musclebound bravado and scaredy-cat whining is one of that film’s most memorable bits; in some ways, he’s the most relatable character in the movie. You can tell Cameron on some fundamental level likes these guys. He did, after all, co-write Rambo: First Blood Part II.

But his heart is with the romantics and the dreamers. The machismo tempers and authenticates the sentiment, and vice versa. The Abyss is a seafaring, cool-as-shit action movie that winds up being about a divorced couple reconciling. Titanic is an achingly heartfelt teen romance played out against a disaster ruthlessly recreated with the precision of an engineer. And Avatar is a movie about a gruff, can-do grunt who learns to commune with nature and falls for a Na’vi princess. (It’s also, let’s not forget, a fairly blunt allegory for the US invasion of Iraq, complete with callouts to Bush-era rhetoric like “shock and awe” and the villains’ declaration that “Our only security lies in preemptive attack. We will fight terror with terror.” But this was actually par for the course for big action movies during this era. See also: George Lucas’s Star Wars prequels, which were even more politically pointed.)

The general premise of the picture is, as everybody and their mother have reminded us, not new. The director himself referenced Edgar Rice Burroughs’s John Carter of Mars novels while making it, and the conceit of the soldier who “goes native” is its own subgenre by now, to be found in everything from Lawrence of Arabia to Dances with Wolves. And hey, let’s not forget that the film seems to borrow from Terrence Malick’s the New World, too, not to mention FernGully: The Last Rainforest. Avatar may be derivative, but it’s not insincere. Cameron clearly feels every beat of the story along with his viewer. He lets us discover Pandora through Jake Sully’s eyes, first as a fearsome, terrifying place, then as a land of unimaginable awe and delight.

There’s nothing pro forma about Jake’s falling for Zoe Saldana’s Neytiri. Cameron’s a little in love with her himself. When our heroes ride their banshees at breakneck speed down a cliff, we can feel Cameron living viscerally through his creation. It’s every nerd’s dream: to find a beautiful mate, preferably with fangs, with whom you can race your magic flying dragons in a distant wonderland. It’s so clear that Cameron wants the Na’vi’s world of bioluminescent veins and mystical spirits to be true. He wants it to be true so much that he’s created an entire science for it. His aforementioned, almost parodic attention to detail isn’t just the obsessive rantings of a billion-dollar Hollywood taskmaster, it’s that of someone who has reversed the typical artistic exchange of filmmaking, in which artists create worlds for audiences to lose themselves. In Cameron’s case, one suspects that the realer it is for us, the realer it will be for him.

So, the protagonist of Jake Sully – the soldier torn between duty and the enticing wonders of a mystical world – feels quite personal for Cameron, too. Not just in the tension between the badass who becomes a hippie crusader, but also in the idea of the dreamer who must learn to let go of what he once believed was the real world. Whereas most movies would have their heroes ultimately reconcile themselves with reality, Avatar again goes in the opposite direction. It urges us to leave all that behind. It becomes an allegory for Cameron’s own inability to let go. And it’s clear he still hasn’t. He’s reportedly working on four sequels. Long may he dream.