Putin and the power of myth-making 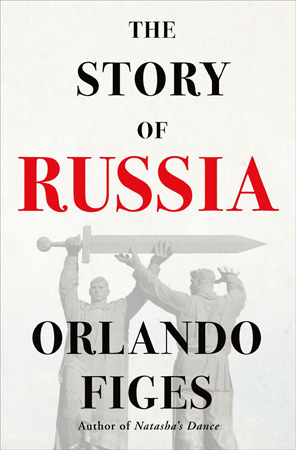 Every nation has its founding myths and narratives, usually starring historical figures we know almost nothing about; absurd stories even to the schoolchildren to whom they are usually peddled. Think Alfred and the cakes or Robert the Bruce and his study of spiders. For Russia, it has long been Grand Prince Vladimir, who had 800 concubines and wives before choosing Christ over Muhammad at the end of the first millennium for the very Russian reason that Islam did not permit alcohol. In truth, Vladimir (or Volodymyr to the Ukrainians) is a classic founding figure, now a saint, about whom almost nothing is known. Yet according to President Vladimir Putin, unveiling a monstrous statue to him in 2016, he gathered and defended Russia’s lands “by founding a strong, united and centralized state.”

As Orlando Figes’s new history methodically lays bare, this is both myth-making of the first order and of profound importance to understanding Russia today. From Ivan to Peter, Catherine to Nicholas, Russia’s rulers have reforged these myths to suit their own purposes, sometimes as a defensive standard for the people to rally round, sometimes as a badge of celestial honor to cement Moscow’s place as the savior of the west. Often both at once. Last July, Vladimir Putin published his own story of Russia, a 5,000-word essay On the Historical Unity of Russians and Ukrainians, which can now be read as his justification for the invasion he launched seven months later to bring his brother “little Russians” back into the arms of big brother Rus. Reaching back into the mists of myth, he sees the idea of Ukraine as a Trojan horse, an “anti-Russian project” since the 17th century and that the present state is on “historically Russian lands.”

As Figes makes clear, anyone with the most elementary grasp of the shape of Europe, from Berlin to the Urals, would know that borders are determined by raw power, not some mystical racial bond. Flip through any historical atlas of the past 1,000 years and states appear, disappear and move around with astonishing but telling regularity. Empress Catherine, a German, may have founded Odessa (Figes interestingly uses Russian spellings for Ukrainian cities) to capture the world’s grain trade in 1794. But just years before that, the Black Sea coast had been part of the Polish Lithuanian commonwealth.

This historical primer has only traces of the original thinking that Figes’s other important works on Russia have displayed, but it does effectively lay out with important clarity the “structural continuities” of power, how the state and the ruler, be that a tsar or Stalin, “are united in the body of a single being … the sacralization of the tsar’s authority.” He takes us on a chronological journey, in the process highlighting the way Putin and his propagandists have filled the vacuum left by the collapse of the Soviet Union with what Figes calls “the debris of Russian history.” Pride, fear and resentment, aggression and defensiveness have coalesced into the toxic present, which offers a retreat into a conservative celebration of communal sacrifice, with little vision of any constructive future. In his brief post-invasion update, Figes points out the significance of the speech given by Patriarch Kirill on the “day of forgiveness,” in which he labeled the war in the Ukraine a crusade for “human salvation,” reminding the people that Moscow and the Orthodox church are the saviors of Christianity, the last bastions of true morality.

Russia’s soldiers, it emerged, are giving their lives to hold back the onslaught of “gay pride parades,” a Kremlin obsession of the past 20 years. The church yet again has nailed its colors to the authoritarian mast, turning away from European concepts of government and thought and undermining any serious development of a civil society able to challenge central government.

Figes notes the irony that it was the choice of Christianity that opened the gateway to Europe for Muscovy in the first place, which makes Putin’s pivot from all things western so ultimately destructive.

For while geopolitics make an alliance with Beijing an immediate strategic imperative, page after page of the Russian story has been defined by continuous, often highly creative friction between western ideas and Russian Slav exceptionalism. The term Eurasian is bandied around as if the balance of cultural influences were equal, but in truth, after the Mongols had helped establish Muscovy as the primary statelet in the 15th and 16th centuries, what is striking is how marginal the influence of Asia and its culture has been on Russia. However abhorrent the word empire is to “Soviets” and Russians, Moscow became and remains an imperial power, driving at different times into Europe, into Siberia and later into central Asia.

The present Ukrainian horror is the post-imperial catastrophe of a Russia that is struggling to accept what happened with the collapse of the Soviet Union and that empire in 1991. As always with Russia, the costs on all sides will be huge. 1812. 1917. 1945. These dates point to the astonishing impact Russia always has, twice claiming the role of savior of civilization after being invaded itself, as well as being the lodestar of world revolution for over a generation. Add 2022 to that list, as I suspect we will have to, and the long-term reverberations of Putin’s present destruction of Ukrainian cities and confrontation with the West become clear. Is it any wonder that Russians, both leaders and the people, have struggled to accept a humbler status in the world?

Reading The Story of Russia you would be betting against history to suggest that Putin and his present boyars are not reflecting something deep in the Russian story. Yet in Kyiv, Putin is now creating another myth that will not easily be forgotten, for a country he does not believe exists: Ukraine.