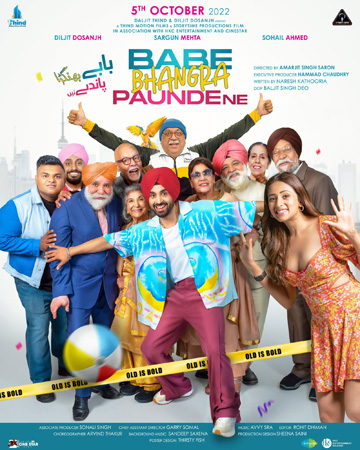 Comedy King, Sohail Ahmed has spotted in a prominent role with Diljit Dosanjh and this international collaboration is a treat for Punjabi fans. The trailer shows the genre of the movie which is comedy and forte of Sohail Ahmed. The trailer also reveals that the movie is produced by Hammad Chaudhry, CEO of HKC Entertainment also belongs to Pakistan. He is the executive producer of the film.

The trailer opens with Diljit along with his friends sharing multiple money-making ideas among themselves. He later thinks of adopting a father and getting money from an insurance policy. Sargun Mehta, who works at an old age home, becomes a part of Diljit’s plan by sharing information on the health condition of her clients. The father is played by Sohail Ahmed. They try their best to keep him alive till the policy is active, which would take 25 days, but the twist is that things don’t go as planned as Sohail Ahmed’s health is seen improving.

The movie has been shot in the USA and is directed by Amarjit Singh Saron. Diljit Dosanjh took to Twitter and announced that the film will be released on October 5th, 2022.