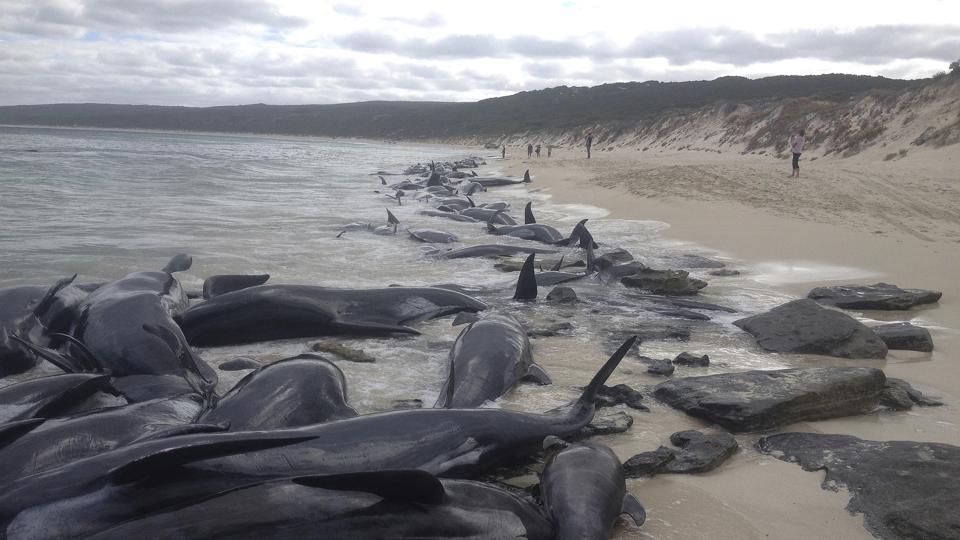 About 200 pilot whales perish on Australian beach after stranding themselves on an exposed, surf-swept beach on the rugged west coast of Tasmania, Australian rescuers said Thursday.

Just 35 of the approximately 230 beached whales are still alive, according to state wildlife services, who described a tough battle ahead to rescue survivors.

Aerial images from the scene revealed dozens of glossy, black mammals strewn along Ocean Beach, stuck on the waterline where the frigid southern ocean meets the sand.

Locals covered some of the creatures with blankets and doused them with buckets of sea water to keep them alive until more help arrived.

“We have got about 35 surviving animals out on the beach and the primary focus this morning will be on the rescue and release of these animals,” said state wildlife operations manager, Brendon Clark.

“Unfortunately we do have a high mortality rate on this particular stranding,” he added.

“The environmental conditions, the surf out there on the exposed west coast, Ocean Beach, is certainly taking its toll on the animals.”

Helpers usually wade into the water and use harnesses to float the mammals into deeper waters, but officials said a new technique will also be tested, using an aquaculture firm’s mechanical aid.

From there a vessel will take them to deeper clearer waters to avoid a new stranding.

Two years ago nearby Macquarie Harbour was the scene of the country’s largest-ever mass stranding, involving almost 500 pilot whales.

More than 300 pilot whales died during that stranding, despite the efforts of dozens of volunteers who toiled for days in Tasmania’s freezing waters to free them.

Clark said the conditions of the latest stranding were tougher for the whales than two years ago, when the animals were in “much more sheltered waters”.

Attention will also turn to the removal and disposal of carcasses, which often attract sharks.

Necropsies will be performed for clues as to why the whales beached, but scientists still do not fully understand why mass strandings occur.

Scientists have suggested pods could go off track after feeding too close to shore.

Pilot whales — which can grow to more than six metres (20 feet) long — are also highly sociable, so they may follow podmates who stray into danger.

That sometimes occurs when old, sick or injured animals swim ashore and other pod members follow, trying to respond to the trapped whale’s distress signals.

Others believe gently sloping beaches like those found in Tasmania confuse the whales’ sonar making them think they are in open waters.

The latest stranding came days after a dozen young male sperm whales were reported dead in a separate mass stranding on King Island — between Tasmania and the Australian mainland.

State officials said that incident may have been a case of “misadventure”.

In nearby New Zealand strandings are also common.

There, around 300 animals beach themselves annually, according to official figures and it is not unusual for groups of between 20 and 50 pilot whales to run aground.

But numbers can run into the hundreds when a “super pod” is involved — in 2017, there was a mass stranding of almost 700 pilot whales.