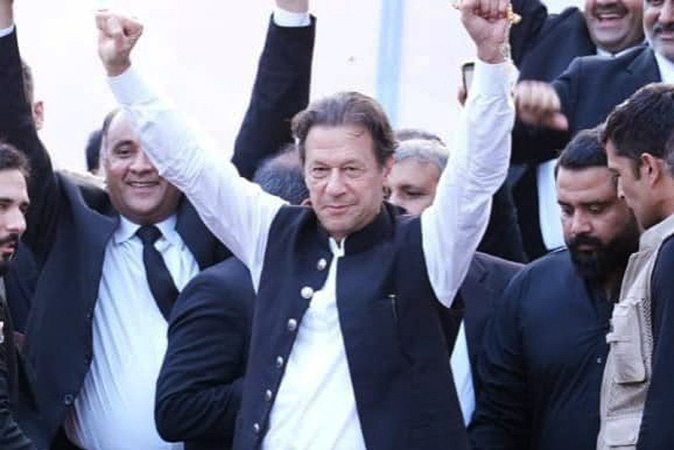 Former prime minister and PTI Chairman Imran Khan on Wednesday said that PTI’s movement for “Haqeeqi Azaadi” (actual freedom) will begin on Saturday (September 24), as he called on supporters to get ready for his call.

Addressing the All Pakistan Lawyers Convention in Lahore, Khan urged party workers and supporters to get ready for his call as establishing the “rule of law” was the country’s foremost need. “I will give a call and we will get our country liberated in real terms,” he said in his address at the convention. “If the justice system is not right, then the country’s economy won’t be streamlined,” he said, adding that there will not be any investment in the absence of rule of law. “You have to stand up for law and governance in this country. I need the lawyers community for my country,” he said.

The former premier said that a society which does not have rule of law gets destroyed. “Ever since they (the government) came into power after a ‘foreign conspiracy’, the country has been dismantled. What message are we giving to the youth by bringing such people to the power that only small-time thieves get caught here,” he said.

The PTI chief said that the current rulers have gotten rid of their corruption cases through NAB law tweaks. “The agencies whose job is to enforce the rule of law are breaking the law. The powerful can do anything in this country,” he added.

The PTI chief said that corruption grips the country in the absence of a rule of law. “The IMF and World Bank have said that Pakistan is becoming another Sri Lanka. Today, Pakistan’s inflation is at a historic high. We will pull Pakistan out of this [situation],” the former prime minister remarked.

He reminded lawyers about their responsibility in the current situation and asked them to stand for rule of law. Shifting the conversation toward one of his cases, Khan said that a case regarding amendments to the National Accountability Bureau’s (NAB) law is in court.

Khan said that if 500,000 overseas Pakistanis invest, we wouldn’t need to ask for loans. “Name one western country whose prime minister’s property worth billions is abroad,” he said, questioning participants at the lawyer’s convention and asking how much Narendra Modi’s property exists abroad.

Comparing the developed and under-developed countries, he cited the supremacy of law as the only difference between the two. “I haven’t seen people issuing threats from unknown numbers,” he said, adding that in countries where there is poverty, there is no justice.

Condemning the torture inflicted on his chief of staff Shahbaz Gill while he was in police custody, the PTI chief said that no other country would have dared to mete out similar treatment to someone.

Khan, while targeting Prime Minister Shehbaz Sharif, said: “He [Shehbaz] and his sons were indicted; however, he was elected as the premier.” “What message are we sending to our youngsters that stealing is not a bad act?” he questioned, accusing PM Shehbaz of “asking for money wherever he goes.”