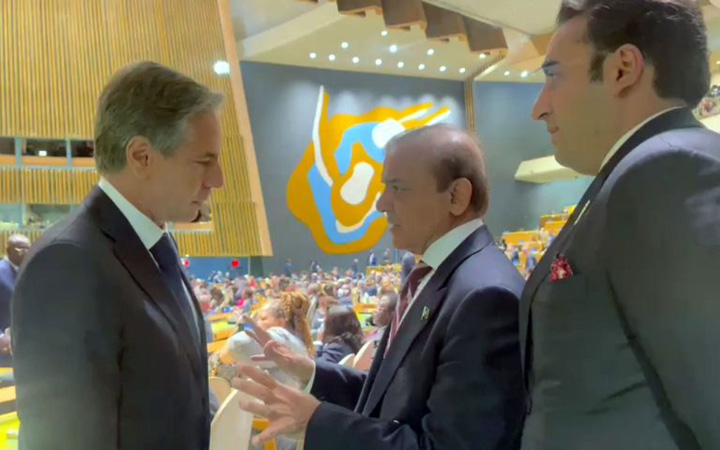 Prime Minister Shehbaz Sharif on Wednesday said the devastation caused by floods in Pakistan needed the attention of the international community to help the country cope with the grave challenge of relief and rehabilitation.

“Pakistan is passing through difficult times and the havoc wreaked by floods, which is obvious before the world, needs serious attention,” he said in his video statement on the situation of flash floods in the country.

The prime minister, who is in New York to attend the 77th session of the United Nations General Assembly, said he was in touch with the authorities concerned back in Pakistan dealing with the post-flood relief and rehabilitation activities.

During the interaction with the world leaders, Sharif said that he highlighted the plight of the flood-affected people including children. The prime minister urged the local companies manufacturing baby food to meet the required quantity of the commodity to be supplied to the children in the flood-hit areas. He also stressed amplifying donation of baby food in order to address the shortage of the stuff.

PM Sharif lauded the federal and provincial governments besides the armed forces and the National Disaster Management Authority in carrying out rescue, relief and rehabilitation activities in the flood-affected areas.

Prime Minister Shehbaz Sharif said his meetings with the world leaders on the sidelines of 77th session of the United Nations General Assembly focused on the need to deal with climate change and enhance trade partnerships.

“In my interactions with the world leaders on the sidelines of UNGA Session, I apprised them of the flood disaster and highlighted the need for a collective action to deal with climate change,” he said in a tweet.

PM Sharif highlighted Pakistan’s intent to strengthen ties with other countries relating to trade and economy. “I also told them Pakistan is keen to build partnerships in the realms of trade and economy,” he said.

Among the leaders the prime minister met was US Special Envoy for Climate Change John Kerry.

The two leaders discussed the devastating floods in Pakistan, the $55 million provided by the US in assistance so far, and the “urgent need to work together” to fight the climate crisis and prevent future tragedies, Kerry said in a tweet. “My heart goes out to the affected communities and the Pakistani people,” he added.

The prime minister also met International Monetary Fund Managing Director Kristalina Georgieva. Apart from meeting other leaders, the prime minister will attend a dinner reception to be hosted by US President Joe Biden.

Prime Minister Shehbaz Sharif met with Chancellor of Austria Karl Nehammer on the sidelines of the 77th session of UN General Assembly. During the meeting, the two leaders reviewed bilateral relations and exchanged views on regional issues of common interest.

The Prime Minister highlighted the immense devastation caused by the unprecedented climate-induced floods in Pakistan and the government’s actions to address the colossal challenge.

He thanked the Austrian government for its expression of solidarity with the affected people and for extending flood relief assistance. He stressed that Pakistan had become a major victim of the adverse impacts of climate change, while its contribution to global carbon emissions was less than 1%. He added that collective action by the world community to meaningfully and substantially address the climate challenge was imperative.

Emphasizing the importance of a comprehensive reform of the UN Security Council, Prime Minister Muhammad Shehbaz Sharif on Wednesday underscored the need for continuing transparent, consultative and constructive intergovernmental negotiations, which would respond to the positions and expectations of all member states.

The prime minister held a meeting with President of United Nations General Assembly (PGA) Csaba Korosi here on the sidelines of 77th Session of UNGA.

Drawing attention to the unprecedented rains that had triggered the worst natural disaster in Pakistan’s history, the prime minister stressed that the support of the international community was crucial to help the country respond effectively to the climate catastrophe, and to recover and rebuild, in a sustainable manner. He also extended Pakistan’s support, as the current Chair of the Group of 77 and China, to advance the development agenda in the General Assembly, and other relevant bodies and forums.

Highlighting the multiple challenges confronting the world today – the COVID pandemic, economic recession, climate change, great power tensions, and a number of old and new conflicts, the prime minister hoped for concrete responses by the Assembly under his leadership.

US Secretary of State Anthony Blinken met Prime Minister Shehbaz Sharif here at the UN General Assembly. Secretary Blinken expressed sympathy for the flood victims and assured the Prime Minister of US commitment to stand with Pakistan at this difficult time.