Protests flare across Iran in violent unrest over woman’s death 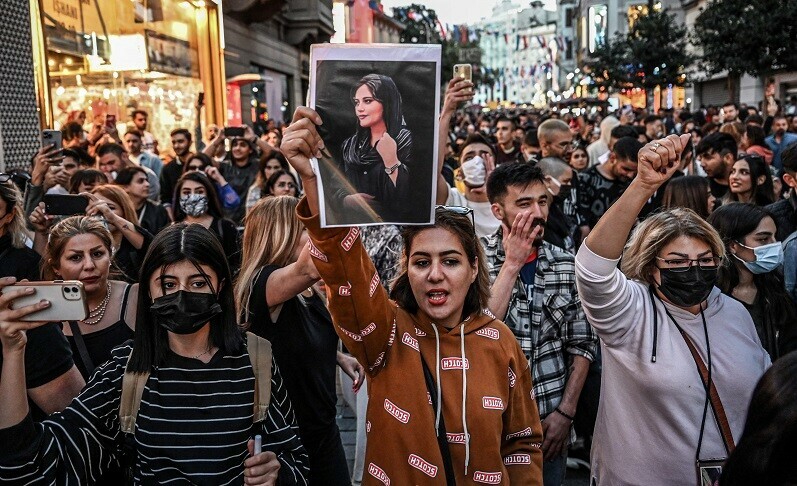 Protests raged for a fourth straight day across Iran on Tuesday and authorities said three people had been killed during unrest over the death of a young woman in police custody.

The death last week of 22-year-old Mahsa Amini who was arrested by morality police for “unsuitable attire” unleashed a flood of simmering anger over numerous issues including rights, security and an economy reeling from international sanctions.

It is some of Iran’s worst unrest since street clashes last year over water shortages. The Iranian government accuses foreign agents and unspecified terrorists of instigating the violence.

In an apparent effort to defuse tensions, an aide to Iran’s Supreme Leader Ayatollah Ali Khamenei paid condolences to Amini’s family, saying that Khamenei was affected and pained by her death.

“As I promised to the family of Ms. Amini, I will also follow up the issue of her death until the final result,” Pourzahabi said.

Amini fell into a coma and died while waiting with other women held by the morality police, who enforce strict rules in the Islamic Republic requiring women to cover their hair and wear loose-fitting clothes in public.

Her father said she had no health problems and that she suffered bruises to her legs in custody and holds the police responsible for her death.

Demonstrations broke out in Kurdistan and spread on Monday and Tuesday to several other provinces in northwestern Iran.

Violence by the regime's security forces against the protesters in Kamyaran, Kurdistan province. #Mahsa_Aminipic.twitter.com/Y2nALtQwET

Videos posted on social media websites on Tuesday purported to show demonstrations in provinces across Iran, including several regions that had so far been untouched by the unrest.

Reuters could not independently verify those videos.

The deadliest unrest has taken place in the Kurdistan region, where state officials and activist websites have reported at least three people killed.

The governor of Kurdistan province said the deaths were suspicious and blamed unspecified terrorist groups.

“A citizen of (the city of) Divandarreh was killed with a weapon that isn’t used by the armed forces. Terrorist groups are looking to kill,” Esmail Zarei Koosha said in comments reported by the semi-official Fars news agency.

Protests flare across Iran in violent unrest over woman’s death

The protests, sparked by Amini’s death, have “shed light on the groundswell of issues that ordinary Iranians face every day related to security, freedom”, said Sanam Vakil of the Chatham House think-tank.

“I don’t think this is an existential challenge to the regime … because the system in Iran has a monopoly of force, a well-honed security strategy that it is already implementing,” she added.

Protesters marched through Tehran’s Grand Bazaar on Monday chanting “Mahsa Amini, Rest in Peace”, according to a video posted by the widely followed 1500tasvir Twitter account, which publishes footage it says it receives from the public.

In one large protest in Tehran, a crowd of demonstrators wearing black shouted, “Oh the day when we will be armed”, according to another video posted by 1500tasvir overnight.

Reuters was unable to verify the videos.

Protesters took to the streets elsewhere in Tehran chanting anti-Khamenei slogans and police fired tear gas to disperse them, the semi-official Fars news agency reported in a rare admission by state-affiliated media of the scale of unrest.

Activist social media accounts including 1500tasvir said the demonstrations had spread to multiple areas across northwestern and central Iran such as Tabriz, Arak and Isfahan.

Hengaw said there were protests in 13 cities on Monday and that 250 people had been arrested.

Reuters could not independently verify those reports.