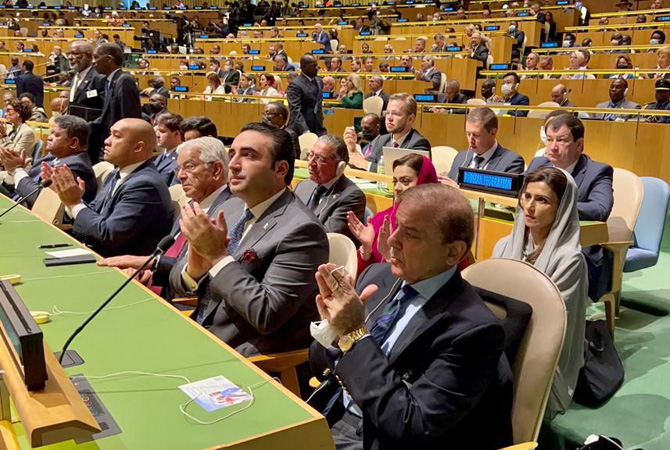 Prime Minister Shehbaz Sharif Tuesday emphasized the international community to realize their sentiments of solidarity for the flood-stricken people of Pakistan into action for much-needed relief and rehabilitation of the suffering humanity.

The prime minister, who is currently on a US visit to attend the 77th session of the United Nations General Assembly, told a private television channel that he had “encouraging” interactions with the world leaders on the sidelines of the annual meeting of the 193-member world body.

He mentioned his bilateral meetings with Austrian chancellor and Spanish counterpart Pedro Sánchez and others, saying the objective was to sensitize the international community at the United Nations platform about the devastation caused by the disastrous floods in Pakistan.

He said UN Secretary-General Antonio Guterres, in his address at the high-level debate on the issues of global peace and security, particularly mentioned Pakistan “thrice” to highlight the worrisome situation caused by the climate change-induced floods. He said the UN chief also talked about showing solidarity with the flood-hit Pakistan. However, that solidarity needed to be turned into actions, he added.

Asked whether the Kashmir issue, besides floods, would also be part of his speech at the UNGA, the prime minister replied, “Why not.”

Meanwhile, taking to Twitter, PM Shehbaz Sharif informed about his arrival in New York a few hours ago, saying he is there “to tell Pakistan’s story to the world.”

“A story of deep anguish and pain arising out of a massive human tragedy caused by floods. In my address at UNGA and bilateral meetings, I will present Pakistan’s case on issues that call for the world’s immediate attention,” the premier wrote. Meanwhile, Prime Minister Shehbaz Sharif Tuesday met President of Iran Seyed Ebrahim Raisi here on the sidelines of the 77th session of the United Nations General Assembly (UNGA). The prime minister recalled his warm and cordial meeting with President Raisi on the sidelines of the SCO Summit in Samarkand on September 15 and underscored his commitment to enhance Pakistan-Iran relations in diverse fields. He reiterated his gratitude to President Raisi and to the people of Iran for their solidarity and support with the Pakistani nation in the wake of massive floods. During the meeting, the two leaders agreed to further deepen and broaden bilateral cooperation across a broad range of areas, including economic and trade, energy and connectivity, cultural contacts, and people-to-people links.

The prime minister conveyed that Pakistan highly valued the Supreme Leader’s strong and steadfast support for the just struggle of the people of Indian Illegally Occupied Jammu and Kashmir (IIOJK). He expressed the hope that, on the invitation extended by him, President Raisi would be able to undertake an early visit to Pakistan. Separately, Prime Minister Shehbaz Sharif on Tuesday met French President Emmanuel Macron, and expressed gratitude for solidarity and support for the flood-affected people and for sending timely assistance of tents, water pumps and a team of doctors and nurses. During the meeting held here on the sidelines of the 77th session of the United Nations General Assembly (UNGA), the prime minister hoped that France would also contribute to the government’s efforts in the rehabilitation and reconstruction phase. He apprised the French president of the devastation caused by the massive climate-induced floods across Pakistan and the government’s steps to address the dire situation.

The prime minister added that despite having a negligible contribution to global carbon footprint, Pakistan was among the most vulnerable to its devastation as manifested in the unprecedented floods. He stressed that climate change was a potential area of cooperation between the two countries and for collective global action. The two leaders reviewed bilateral relations, and exchanged views on regional and international issues. Prime Minister Shehbaz reaffirmed the high importance Pakistan attached to its long-standing friendly relations with France, both bilaterally and in the context of European Union. He stressed the importance of further strengthening the bilateral relations across a range of areas, including trade and investment, energy, agriculture, IT, defence and security, and higher education.