Is this the end of Team Muhafiz? 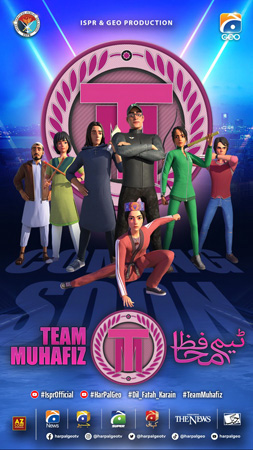 The highly-anticipated finale of Team Muhafiz – dropped on Saturday evening with viewers desperate to find out if the team’s mentor Farman would live to see Seth Rizwan and his men defeated or not.

As an ambulance takes Farman to the hospital after his epic fight with Jabba, Team Muhafiz hatches out to plan to take down the enemies and ensure that Pakistan successfully launches its fifth-generation aircraft in collaboration with China.

The fate of Farman hangs in the balance as a doctor tells Badshah Khan that Farman is in a critical state and might not make it. Determined more than ever to take down Seth Rizwan and his crew, the youngsters remain high-alert as launch day approaches.

They sweep the area to ensure no mischief occurs and the launch goes smoothly. Reza accompanies the Chinese engineer who is a special guest at the launch ceremony. The engineer is impressed by Reza and praises his command of the Chinese language.

Meanwhile, guests enter the venue when the launch ceremony begins, a flash of light at the top of a building catches Zane’s eyes, who immediately contact Badshah Khan to check the camera. And lo and behold, Jabba is seen with a rocket launcher aimed at the venue, ready to blow it up.

With Jabba, placing himself in position, the heroes sneakily creep up to him and indulge in another epic fight. As Jabba tries to run away from the trio – Zane, Mahnoor, and Aarya, he is met by Parinaaz who tries to fight him. Fighting on four fronts, Jabba is no match for Team Muhafiz as they bring him down just as the aircraft is launched in the air with the whole country jubilant over the achievement.

Team Muhafiz are recognised as national heroes and receive awards but a sense of missing hangs around them. The team visits the hospital where Farman is hooked up to the machines, not knowing that the enemy has been taken down. But has it? Unable to look at their mentor in this condition, the team departs after leaving their medals at Farman’s window, while Rawka’s voice fills the air seeking vengeance. As Farman’s lifeline ends on the monitor, we are left to wonder if this is the end of Team Muhafiz?