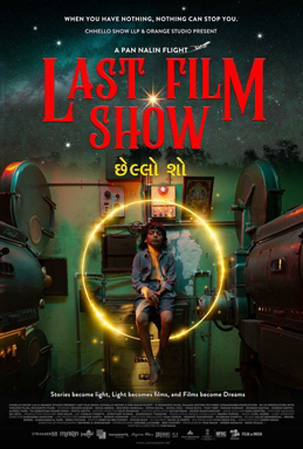 Chhello Show (Last Film Show) has been chosen as India’s submission to the Best International Feature Film category at the 95th Academy Awards.

Talking about Chhello Show being India’s entry for 2023 Oscars, director Pan Nalin said in a statement, “I could have never imagined such a day would come and bring light and celebration of light. Chhello Show has been enjoying love from around the world but there was an ache in my heart that how do I make India discover it? Now I can breathe again and believe in cinema that entertains, inspires and enlightens! Thank you FFI, Thank you Jury.”

Indiewire’s David Ehrlich called Chhello Show a “coming-of-age story” with “an ethereal take on the magic of movies”. “A semi-autobiographical fable set in the Indian state of Gujarat where Nalin was raised, Last Film Show might sound like a cutesy modern riff on Cinema Paradiso, but – as you already know – this achingly bittersweet requiem for a dream pulls from a much deeper pool of inspirations. Two of them are Sergio Leone and Terrence Malick, and both drift into our mind’s eye from the moment we first see nine-year-old Samay walking along the railroad tracks that stretch past the modest house from which his overbearing father Bapuji sells tea to passengers aboard the rickety trains that stop nearby. Played by Bhavin Rabari, a precocious and compulsively watchable nine-year-old Gujarati boy who shares much in common with his character, Samay doesn’t really know what cinema is at the start of the movie, and yet his life is already full of the stuff,” read the review.

The two films that were being speculated to be India’s entry for the category were The Kashmir Files and RRR, with the latter gaining the most traction in the West. The SS Rajamouli epic, ever since it released on Netflix, found a wider audience base with the international media, filmmakers and fans taking note of the filmmaker’s wildly imaginative storytelling.

SS Rajamouli has in fact even attended multiple screenings in the US and addressed the audience as part of his efforts to boost the chances of RRR at the Oscars.

Last year, Tamil drama Koozhangal (Pebbles), directed by filmmaker Vinothraj PS, was selected as India’s official entry in the Best International Feature Film category. The film, however, could not make it to the shortlist.

What did make it to the final list was Indian documentary feature Writing With Fire, which bagged a nomination at the 94th edition of the Academy Awards. Directed by Rintu Thomas and Sushmit Ghosh, Writing With Fire was the first Indian feature documentary to be nominated for the Oscars. It lost the Oscar to Summer Of Soul (Or, When The Revolution Could Not Be Televised).

So far, no Indian film has ever won an Oscar. The last Indian movie that made it to the final five in the best international feature category was Ashutosh Gowariker’s Aamir Khan-starrer Lagaan in 2001. The other two Indian movies to have made it to the top five are Mother India and Salaam Bombay.

In 2019, rural India-set film on menstruation titled Period. End of Sentence won the Oscar in the Documentary Short Subject category. It was directed by award-winning filmmaker Rayka Zehtabchi and co-produced by Guneet Monga’s Sikhya Entertainment.

The 95th Academy Awards ceremony will be held at the Dolby Theatre in Los Angeles on March 12, 2023.